The purpose of the VibroCool project is a system and process development for an advanced drilling technology of fiber reinforced polymers (FRPs) and FRP metal stacks, aiming for a future strengthening of the composite manufacturing community. Vibration assisted machining, the use of cryogenic cooling or lubrication (two channel feed through of aerosol and liquid CO2), and optimized poly crystalline diamond drills will be combined to reach the highest possible increase in cutting performance. For the realization of the planned technology, single system components as well as their interfaces will be developed and integrated within a sophisticated machine tool. Parallel process technological investigation will guarantee an optimal utilization of the VibroCool technology’s potential.

The planned system, which will be integrated into a commercial machine tool, is illustrated schematically in Figure 4. It consists of a CL-unit (coolant & lubricant) where liquid CO2 and the lubricant (extra-fine aerosol which is a mixture of cutting oil and compressed air) are provided in two separate lines. Both lines go internally through the machine spindle, the tool holder and also the cutting tool. Right next to the cutting zone, the liquid CO2 evaporates and cools down the process effectively without using a liquid coolant. Simultaneously, the aerosol works as a lubricant that reduces the friction between work piece and cutting tool and thus generates less overall process heat. This coolant/lubricant solution will be combined with ultra-sonic assisted drilling technology which will be integrated into a special tool holder. The tool holder will contain an ultra-sonic excitation device to initiate an axial vibration of the cutting tool with high frequencies and low amplitudes. By the superposition of vibration and feed movement, the generated thrust force will be reduced, affecting process-induced part damage and tool life in a beneficial way. Optimized poly crystalline diamond drills and knowledge-based process design for drilling of FRP and FRP metal stacks are further elements of the research initiative. 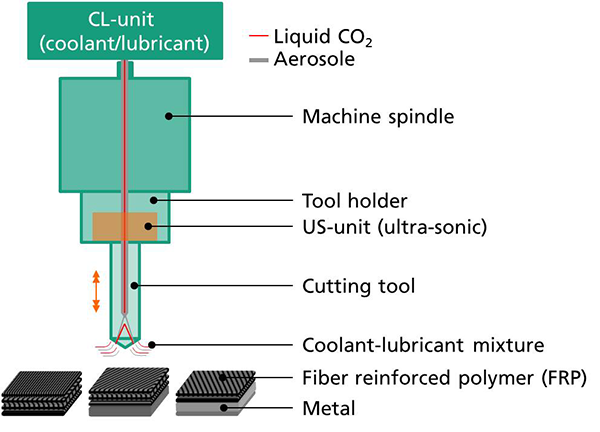 The VibroCool project is divided into different work packages, in which the single components of the entire system will be developed and optimized. More precisely, the project is built on three distinct technology RTD modules (Figure 5). 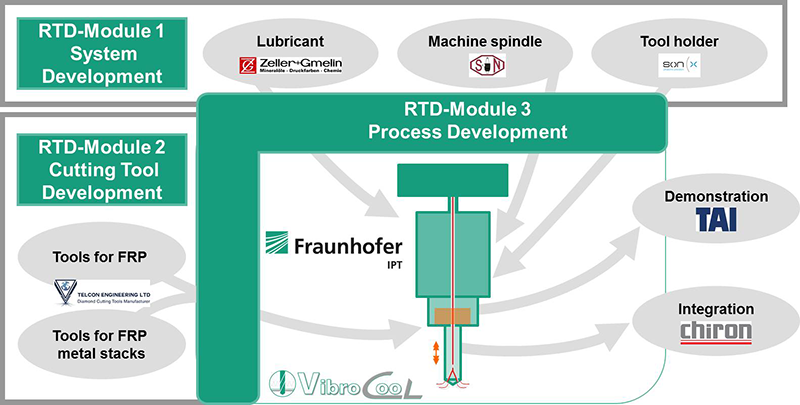 The first RTD module is dealing with the development of different system components to enable the vibration-assisted drilling process, using a two channel coolant/lubricant solution for drilling FRP and FRP metal stacks. The following sub tasks are part of the system development:

The second RTD module is focusing on different cutting tool investigations for ultrasonic assisted drilling of FRP and FRP metal stack structures using polycrystalline diamond tools. Drills will be specially designed to enable the separated feedthrough of lubricant/coolant, aiming for maximum tool life, higher process efficiency and satisfying work piece quality. According to the different requirement of FRP or stack drilling processes divergent approaches will be pursued during the research activities. The following sub tasks are part of the cutting tool development:

In the third RTD module, all process-technological investigations which support the optimal design and development for system and cutting tool development are performed to ensure a determined development process. The final result is the accomplishment of the best possible process performance, using the newly developed technologies/components. The following sub tasks are part of the process development:

Subsequent to the technological work, the individual developments will be integrated into a superordinate system which will be an adapted composite cutting machine. The preparation of the machine tool, including design of interface elements, the modification of media supply as well as the adaption of control technological aspects, will be made in parallel to the RTD-Module activities.

Using the integrated VibroCool technology, the drilling performance will be optimized for the former defined work piece materials. The elaborated process know-how (RTD-Module 3) will be used for the optimization of all relevant machining parameters. The main focus will lie on the analysis of ultrasonic parameters (vibration frequency and amplitude), lubricant/coolant parameters (balancing of the lubricant or liquid coolant input, timing of media input) and drilling parameters (cutting speed, feed value). In particular, this includes the identification of cross-effects with impact on the manufacturing process, which occurs in the wake of a combination of the ultrasonic vibration, the cryogenic cooling, minimal quantity lubrication and related process parameters.

Finally the optimized VibroCool technology will be applied on industry-oriented parts from the aerospace sector. The project targets defined in the beginning of the project will be analyzed and improvements will be evaluated with a view to the state of the art before the VibroCool project.